Climbing out of the hole

I watch a lot of TV. I go through phases with television. When our cable was shut off it was a non-issue. I didn't care to lose track of the shows I was watching. But when we got it back a few months ago, I've been addicted. Catching up on all that I missed, reconnecting with characters, bad-mouthing and probably falsely judging reality show contestants....oh the joys.

I got my little prince started on abcmouse.com. It's a great little website for my little man that isn't in any kind of daycare of pre-school setting yet. I don't know why it's been so hard for me to let him go....but I've sort of subconsciously let that issue constantly float to the back of my mind and not worry about sending him off into the real world. He's so smart, though, so I want to get his brain engaged in a learning setting.

I have a new job. I'm a manager at a mexican place. Salsarita's. Very good food, great company to work for. I am enjoying the learning experience.

So what about you all? What is going on in  your worlds?
Posted by Kristi Faith at 9:16 PM 6 comments:

Imagine me, flying through the air and tackling you with hugs. That's about how I feel to be back online and blogging. Even if you never ever comment. I'm so happy to be here again!

What have I been up to? Not a lot of writing, unfortunately. But I've had a good year of learning experiences. That's what I'm chalking it all up to.

I know there are stories to be found within the events and mishaps of it all. But right now, I'm taking a creative stretch. Not the kind where I don't write. We've already tried that. The kind of stretch that involves going where the stretch takes me, bending where it feels the most beneficial. Writing just for the sheer joy of writing.

*PS I have to figure this stuff out all over again! It's not fair that so much in blogging has changed since a year ago!!
Posted by Kristi Faith at 11:19 AM 8 comments:

We loved The Hunger Games. We loved it so much, I took my two princesses to see it the next week.
Jennifer Lawrence plays the role of Katniss and ROCKS it! She does a great job of channeling the emotions that we as readers were able to see in print, for those that never read the book. She shows her softer sides, the startled and awkward side of her in the interviews.

Before I go into the male roles, I want to say that the filming captures so many things they were unable to portray in the movie for time constraint reasons. Some fans said that there were details missing, or some of them wrong, such as Katniss not receiving the mockingjay pin from the Mayor's daughter. But it's still going to be Hollywood, a movie that has restrictions our writers don't. Which is why books will always reign supreme ;)

Also, about the filming, the scenes in the arena show bloodshed, but it does a good job of not going overboard.

Haymitch, played by Woody Harrelson really threw me off at first, but I think he pulled it off well. Of course, there were a lot of Haymitch conversations left out...but I imagine he will be more active in the second movie.

Josh Hutcherson is such a perfect Peeta. I was completely in love with him the second he shook hands with Katniss on Reaping Day. He must have read this book...a ton of times. I think he probably captured his character the best. Him, and Cinna, played by Lenny Kravitz. Amazing. He said little, showed it all with his eyes, spoke exactly the way he did in my head as I read the book.

Gale, as Princess Rhiannon states, is HOT. "OMG Mom! Look at Gale, he's so hot!" to quote the excited squeal that came from her upon realizing that there was no one else in the theater but us. Liam Hemsworth is the actor and I do have to agree...I hope they keep him around. ;)

It's a movie that I will own one day. I loved it almost as much as the books. Princess Kayla is 8 and although she didn't quite grasp everything, she enjoyed the movie as well. Rhiannon has read the books and so she was thrilled we got to see the movie. She agrees that it's a 5 stars in our book!
Posted by Kristi Faith at 12:06 AM 2 comments:

I have read the series.


I work all day, hence the late showing. I then work all day the next day, so I'll be tired. But I will channel the strength of Katniss! I'm so excited!!

Can't wait to write all about it!
Posted by Kristi Faith at 1:00 AM 1 comment:

I read about 12 blog posts, scanned a couple and emptied my reader list for the morning. I went to work. I worked an ODD shift until about 7:30 and came home to 70 unread blogs.

Yikes! How did I keep up with all of this before?? I was still working..posting less, but still posting, writing a little, reading a little....it was all under control.

I will say now that I most obviously can not comment on every blog that I read.....so my apologies in advance. I do realize and understand that blogging is part conversation, part "listen to me rant" so... (just kidding...I find so many very helpful blogs that are not all about "listen to me rant")

I will also say that currently....my blog has nothing to do at all with writing...except for the lack of writing. And my sudden obsession with ....

I write a lot of fiction at work.. ."Great teamwork!" haha

Until my next brilliant outburst.... I'm going to read some more blog posts!
Posted by Kristi Faith at 1:00 AM 3 comments:

Here I am, I know I disappeared for almost a year. Well, I really didn't disappear. I stayed right here in this little hole of my home...but it's a home. But now I have a computer and internet access again so it's time to start writing! Right?! Uhm. Well. .... Maybe.

So far, the jumping in hasn't happened as quickly as I had hoped. I figured I would start with a blog post since going over old and abandoned WIPs didn't appeal to me. And, I've written about five piece of crap blog posts that I immediately deleted.

That fear has taken hold again. So, I'm making this a short and sweet post. I hope to be writing again, and lots, soon! I can't wait to catch up...or at least rekindle and reconnect with fellow bloggers. Until next time....Lots of love blogosphere, I have missed you!!
Posted by Kristi Faith at 11:38 PM 8 comments:

Ok..truthfully...I have cried more in this past week than I have in a very long time.

The first breakdown occurred at work Saturday night but that was pure exhaustion coming out.

Monday night was fifth grade night where the staff held an awards ceremony and social for just the fifth graders. I thought it would be like any other award day. Boy was I wrong. One of the PTA members put together a slide show of the students as they grew throughout the years. Immediate tears! The music choice alone had me weepy...add pictures of our children's happy smiles and experiences as they blossomed into fifth graders and sheesh!!

Then my beautiful little girl was honored by a WWII Veteran with am American History award.

And then I wrote a poem just for her. It brought me to tears again..and poetry is not where I excel! I want to share it here as well.. in case Rhiannon loses it along the way :)

I remember the day I brought you home. You were tiny and perfect; God gave you to me and I called you my own.
Much too quickly you were a baby no more and I held onto your hands as you practiced walking the floor.
Before too long school days came to call. I cried knowing I wouldn't be there to catch your every fall.
Each year continues to fly by; I never really imagined the day you'd be tall enough to look me in the eye. There are times I know I yell louder than I should. Some days seem to be nothing good.
However, in my life as a mother, I've always found the world to be a brighter place with your smile around.
On this special day when I know you've risen to every challenge along the way; I wanted to have the chance to tell you that I'm proud of you in every way! 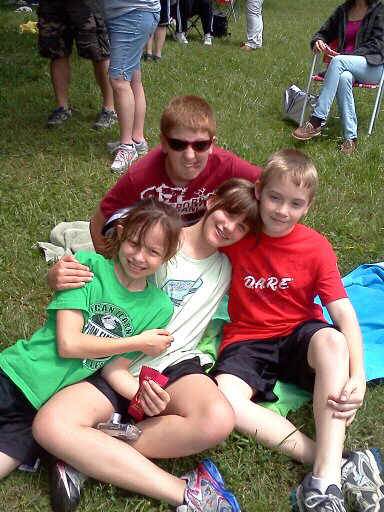 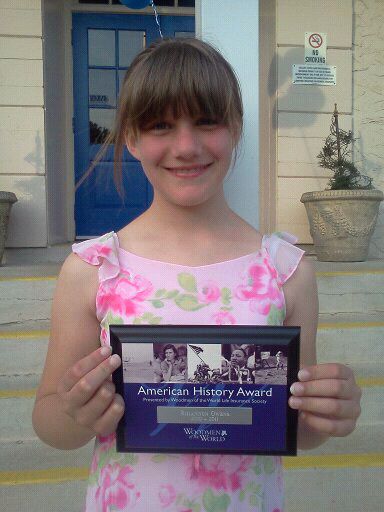 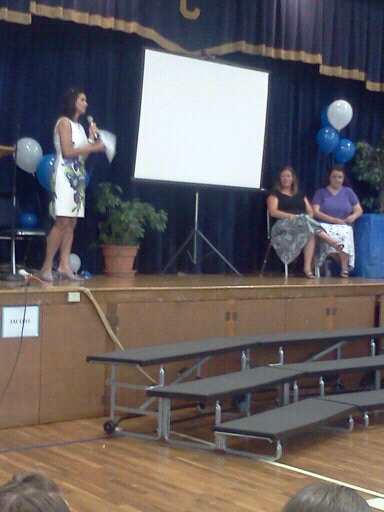 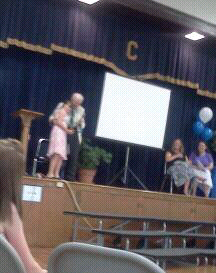